Flutter vs React Native - Which One to Power Your Future Cross-Platform App?

In this article, we are going to review two equally popular cross-platform app development solutions - Flutter and React Native, plus tailor each of them to the project specifics and use case. 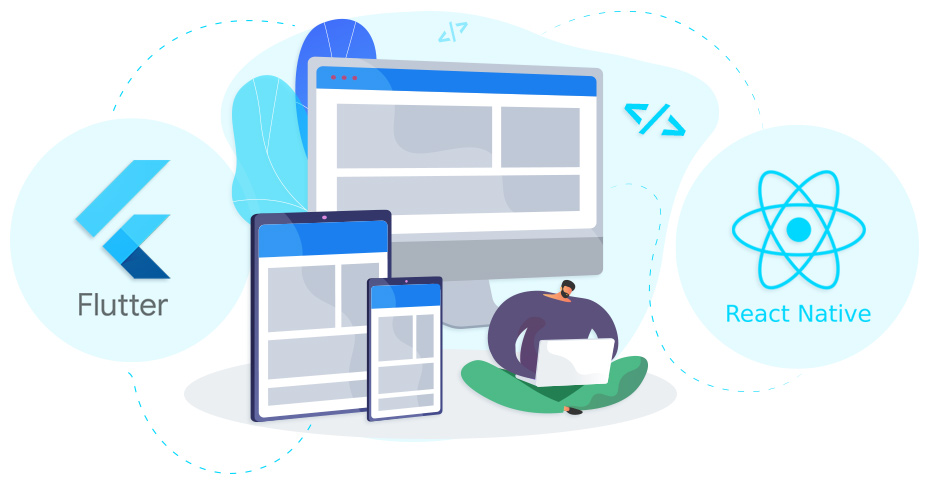 Cross-platform development is a perfect fit option for those startups and companies, which aren’t ready to invest in building two separate native apps but still want to deliver the close-to-native experience to their users. React Native seems to be the most intuitive technology choice for this purpose, but it isn’t the only tool you can consider for creating a cross-platform app.

Feel like getting lost in the cross-platform development opportunities? Let us guide you along this path!

Both Flutter and React Native are the tools for creating a cross-platform app. Is Flutter better than React Native? Or vice versa? The right answer largely depends on the use case, but according to the Flutter vs React Native usage trends and popularity, they are almost equally popular and loved by developers worldwide.

What’s more, React Native and Flutter are two leading and the most frequently chosen technologies compared to other tools to build cross-platform apps in 2021, according to Statista.

Let’s proceed with React Native vs Flutter review to find out which of these cross-platform frameworks suits your software project best. 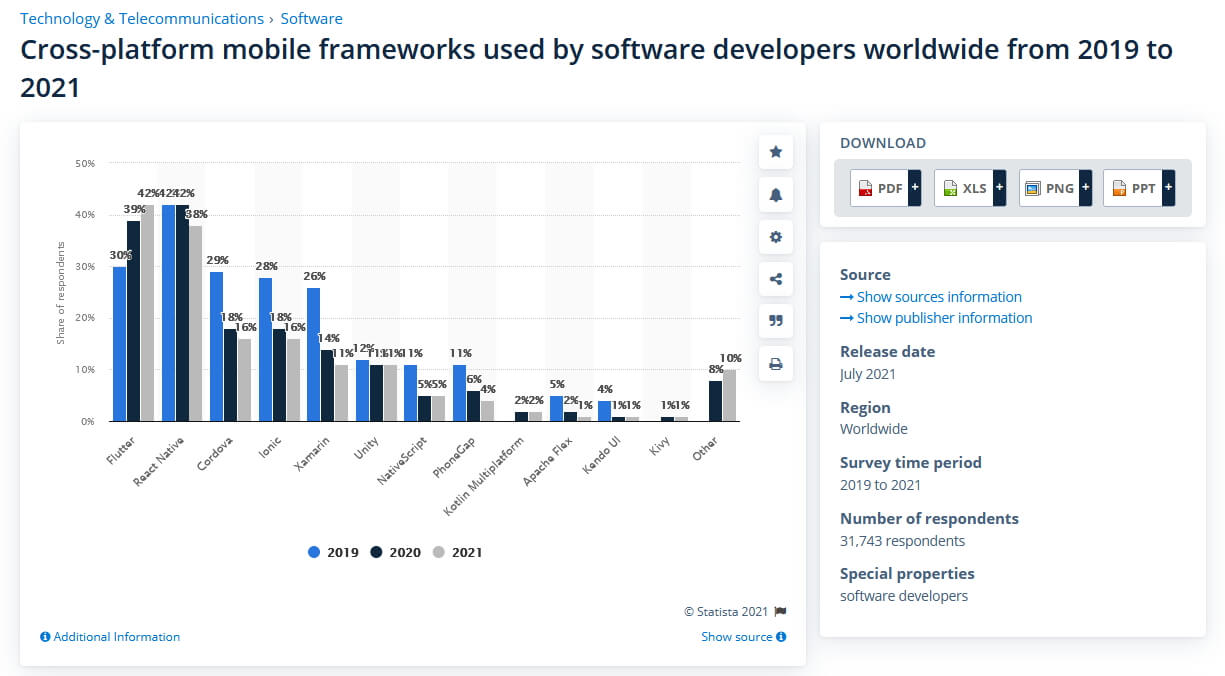 Let’s get started by defining what Flutter is. Flutter is a software development kit (SDK) that uses Dart programming language to create user interface (UI) components. And here is where the core difference between Flutter vs React Native hides.

While Flutter is an SDK, React Native is a framework. To intuitively catch the difference, think of an SDK as a broader concept that covers the whole set of the development tools, including but not limited to platforms, frameworks, documentation, integrations, libraries, application programming interfaces (APIs), and so on. Framework, in turn, provides only the foundation, a kind of skeleton your future app will be based on.

Below are the main pros and cons of Flutter.

As for the Futter apps worth your attention, let’s take a look at the My BMV App created with this technology.

And here is how this app looks on iOS. The solutions created by BMW can be a good example of Flutter in action. Accessed from the browser, it looks and feels like an actual native app, delivering a seamless and enjoyable experience on the fly. 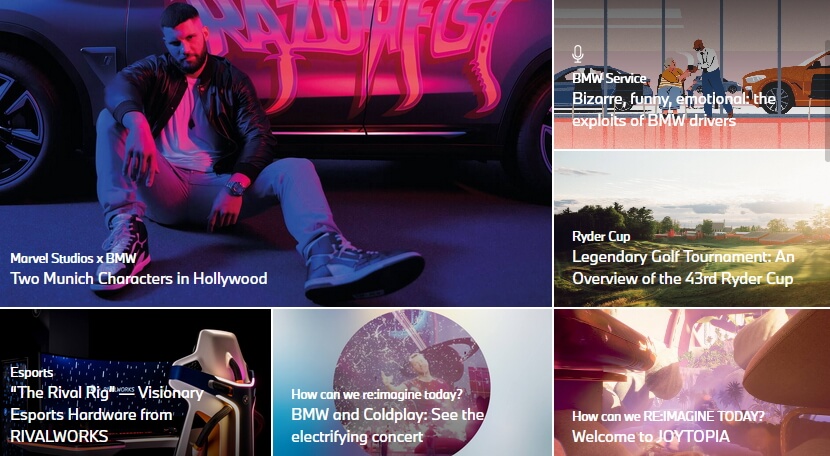 As for its use cases, Flutter can become a perfect choice for animated apps - and the example above confirms it. Being highly performant and easily customizable, Flutter allows for adding multiple animations without the risk of UI overloading. This SDK can also be a good choice for social media apps because of the necessity to withstand loads without losing performance. Generally, Flutter can be tailored to most of the cross-platform projects aimed at speedy development, getting fast response from the market, and providing users with an almost native experience.

So, what is React Native? Actually, this is the first technology that comes to mind when there is a need to create a cross-platform project. The essence of this framework is pretty simple - it allows React Native developers to create powerful websites, which automatically tailor to the specific operating system when accessing from a mobile device. The framework was developed by Facebook; it uses JSX syntax and comes with various features.

Let’s review the pros and cons of React Native in more detail. 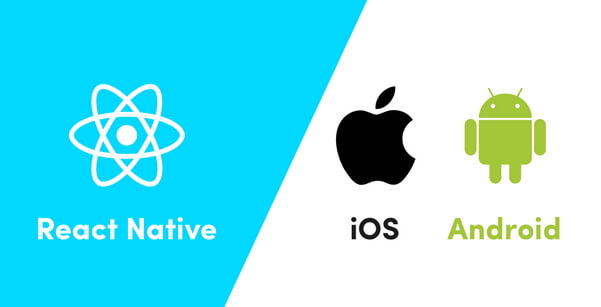 There are a lot of popular apps built with React Native. For example, Instagram, Bloomberg, Uber Eats, and Tesla have created their cross-platform websites using this technology.

Source: Tesla site  (not developed by IT Master)

The Tesla app created with React Native also works perfectly and seamlessly. What’s more, they have also integrated a Shop section - a good example of how the features of React Native can be used for eCommerce as well. 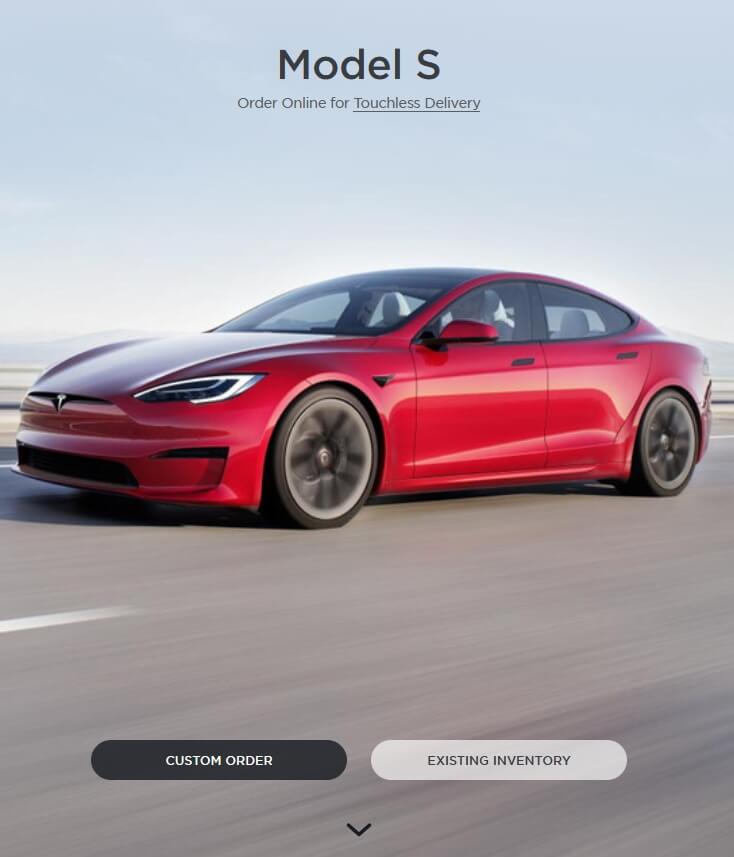 So, what is React Native used for? The specifics of the technology and our experience with it suggest that it can be a good choice for the following categories of apps.

Already have a winning idea in the pocket? Let’s transform it into validatable MVP together. Hire us for MVP development services today!

IT Master Soft also has a prominent example of React Native technical features in action. For one of our customers, we have created a Thank Me app - the solution on the verge of on-demand and eCommerce, allowing users to thank and tip anonymously for the goods and services they liked and/or purchased.

The idea of the project was pretty unique and low-competitive but it still needed market validation. That’s why we have chosen React Native as one of the most powerful tools to create an MVP according to the LEAN development methodology.

We have also made conference software with React Native. This is an example of how React Native-powered apps can withstand heavy load and perform well at instant data transfer.

As for one more solution worth mentioning, we have created an eCommerce project which allows for finding the stores that accept cryptocurrency. The search process is enhanced with geolocation and mapping features.

Which is better Flutter or React Native - comparison chart

So, what is the difference between Flutter and React Native? The core difference is that the first one is an SDK, while the second is a framework. Most of the in-build features and use cases of these technologies are similar, so making the choice between Flutter vs React Native can be challenging. The developers who have tried both of the tools say that Flutter is easier and more intuitive; it allows for creating an app faster while using React Native requires more time and skills. Futter, in turn, comes with more in-build tools and opportunities the developers may use as they are, while React Native requires using some add-ons.

Both Flutter and React Native are top tools for cross-platform development recognized by the tech community and businesses using them. What should you choose for your project, - Flutter or React Native - if you want your future app to be both performant, awesome, and cross-browser compatible? The final result you get directly depends on the skills of the developers using these tools for your project. Our programmers are experienced with both technologies and would be happy to suggest the right option to create your solution with.

React out to us for instant and free consultation!